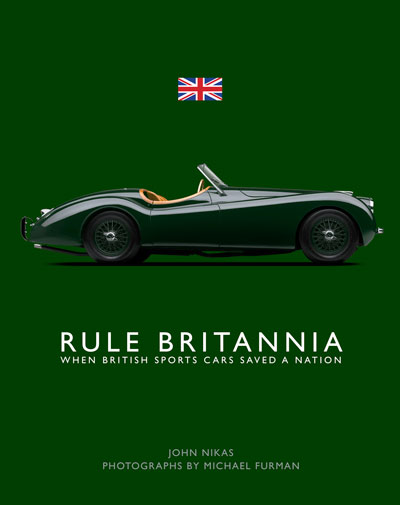 Despite success in its epic struggle to conquer tyranny during the Second World War, Great Britain emerged from the conflict at the brink of financial disaster and burdened by continued rationing of food, fuel, and consumer goods. Displaying the same indomitable spirit that had allowed the nation to carry on during the early days of the conflict when it fought alone against Hitler and his minions, Britons steeled their resolve, turning their attention to the devastated economy.

Overwhelmed with debt and having to rely on foreign assistance to meet basic needs, the new Labour government issued a mandate for industry to “export or die,” allowing them to earn the hard currency needed to place the country back on its feet. Among those that answered this clarion call were automotive manufacturers such as A.C., Aston Martin, Austin-Healey, Jaguar, MG, Mini, Morgan, and Triumph, whose sports cars gained an immediate and enthusiastic following around the world, helping to resurrect their moribund homeland in the process.

Rule Britannia – When British Sports Cars Saved a Nation celebrates this compelling story with authoritative text from John Nikas and his team of dedicated researchers and contributors; historic imagery from archives maintained by marque clubs, manufacturers, and museums; and modern portraits artfully captured in a studio setting by Michael Furman, the world’s most renowned automotive photographer.

Along with insights from some of the most legendary names in Motordom, including Goodwood’s Lord March, Le Mans legend and television presenter Alain de Cadenet, celebrated historians Graham Robson and Timothy Whisler, and admired designer and writer Robert Cumberford, this volume has already received critical acclaim and is certain to become a touchstone for the genre. Join us to relive this remarkable period in automotive history when sports cars truly saved a nation.


"A great book, Rule Britannia is a comprehensive review of the design and manufacture of British sports cars, containing previously unknown facts and undiscovered photographs...Every sports car enthusiast should have a copy of this very interesting publication on their bookshelf."
- Gerry Coker, Austin-Healey Design Legend


"Rule Britannia tackles all of the above with profoundly researched and delightfully readable text from John Nikas. His information is precise without being in any way tedious and provides a concise history of the major players in the postwar construction of the British Motor Industry. Aided and abetted with period photographs and Michael Furman’s exceptional studio portraits, this tome deserves to become an industry standard and warrants a place in every library in the country."
- Alain de Cadenet, Driver, Author, TV Presenter


"This is a wonderful book about the cars so many of us have loved, but it’s also a fascinating tale of the often precarious historical and financial fates that created them--against a background of the most turbulent and violent century in history. To read this book is to feel blessed by fortune that you ever got to drive an MGTC, an E-type or a Healey 100, and to realize that nothing was preordained."
- Peter Egan


"Oh my goodness what a book. I love it. Not only is it stunningly produced, it's so charmingly told—it has taken two guys from across the pond to put the golden era of British Sports Cars into words and pictures. Best of all is the detail—authoritative images with text to match. Bloody well done!"
- Jeremy Jackson-Sytner